Climate Change: Crisis or Opportunity for the Real Estate Industry?

With the current focus on COVID-19, the issue of global warming has fallen to the back burner. When was the last time you even thought of Greta Thunberg?

We have not inherited the land from our fathers, we have borrowed it from our children – Dennis J. Hall

About 6 months ago I got really depressed about the state of the environment. I grew up spending summers in the game reserves of Africa. I remember the wonder of seeing a Rhinoserous and her calf for the first time. The terror and excitement of an elephant that charged at our tiny car. It seems like a thousand lifetimes ago as I sit in my basement managing a software company through the pandemic.

We’ve lost 20 per cent of the Amazon in the last 50 years, and more than 50 per cent of shallow-water corals have disappeared since 1990.

As I have written before, things are changing quickly. The World Wildlife Fund reported that more than half the world’s vertebrates have disappeared since 1970. We’ve lost 20 per cent of the Amazon in the last 50 years, and more than 50 per cent of shallow-water corals have disappeared since 1990. The devastation caused by forest fires is the latest indicator of the folly of ignoring the realities of climate change. As I think about the environment now, while there is a pressing cause for alarm, I also see there is a profound opportunity for leadership.

Insurance and Real Estate are two of the bedrocks of society. The insurance industry is already warning that the increasing frequency and intensity of extreme weather events is threatening the ability to provide continued coverage to existing and new policyholders. California regulators temporarily banned insurers from refusing to renew home-insurance policies in certain wildfire-prone parts of the state in an effort to halt an insurance-availability crisis.

…Real Estate sector has the opportunity to provide meaningful leadership at a global scale.

Amidst the insanity of current partisan politics in the US racing to the bottom in refusing to address the realities of climate change, the Real Estate sector has the opportunity to provide meaningful leadership at a global scale. European institutional investors have taken the first important steps by flexing their economic muscle to require the portfolios they fund to participate in the Global Real Estate Sustainability Benchmark (GRESB). This initiative focuses on showcasing and ranking the performance of buildings and portfolios in reducing their Carbon Emissions.

As an industry, we are now starting to aggressively implement renewable energy and low energy products in the construction of all new buildings, as well as in mandating retrofits in existing buildings. The dramatic growth in PropTech over the past five years is further evidence of the industry’s willingness to invest in innovation.

What’s needed is a broader and more concerted effort by our sector to come together and lobby for tighter emission standards. We also need to ensure enforcement agencies have the regulatory teeth to provide the kind of cuts in greenhouse gas emissions that are required to slow and ultimately reverse the pace of global warming..

As a species, we are notoriously opportunistic and short-sighted. We also tend to look for international scapegoats like China and India, who are amongst the largest emitters with the least stringent regulations, to justify a “what’s the point” attitude.

…what is required right now is the discipline, long-range thinking, and consistency that we can provide that is sadly lacking in causing meaningful change.

The Real Estate sector has a culture of looking at longer time horizons of 10, 20, or even 30 years, and we are often accused of being slow to change and ponderous. However, what is required right now is the discipline, long-range thinking, and consistency that we can provide that is sadly lacking in causing meaningful change.

We also have a vested interest, and we know it. There are now numerous conferences, articles, and investments in resilience. In the short term, building structures able to withstand the inevitable rise in extreme weather events is prudent. In the longer timeframe, the solution sits with addressing the root of the problem.

There is cause for optimism…

At 11:00am on May 8 of 2016, Germany set a new record, with 95 per cent of the entire country’s power demands being met by renewable energy sources, and the price of power actually went negative for several hours. This breakthrough resulted from an initiative called Energiewende (“energy transition”), where the government is committing to reduce greenhouse gas emissions by 80 to 95 per cent by 2050.

The current global Gross Domestic Product is approximately $80 trillion. It has been estimated that the total annual cost to limit global warming to 1.5°C (a critical threshold) will cost about $900 billion a year for the period 2015 to 2050 – about 1.1% of the global GDP. This is a viable investment on a worldwide scale to ensure a sustainable future for our children.

As Arnold Glasgow once said, “One of the tests of leadership is the ability to recognize a problem before it becomes an emergency.” What’s needed now is a powerful, respected, and forward-thinking voice to lead the way. What could be a more perfect role for our sector at this time?

Refined Data develops EHS and operations management software for the Commercial, Retail and Multifamily real estate sector. With more than 3,500 buildings representing more than a quarter billion square feet on the platform, Refined Data has delivered award-winning value to leading real estate companies for over a decade.  We welcome any opportunity to hear your challenges and thoughts and see if we can assist you in taking your operations to the next level. Please feel free to contact us at www.refineddata.com.

About the Author: Hugh Molyneux

Hugh Molyneux is a founder and President of Refined Data, an award-winning developer of EHS and Operations Management Software for Real Estate. More than 3,500 buildings worldwide rely on Refined Data as their platform of choice to manage Environmental Risk, Health & Safety, Compliance and Site Operations.

How to Promote a Safety Culture with EHS Incident Reporting Software 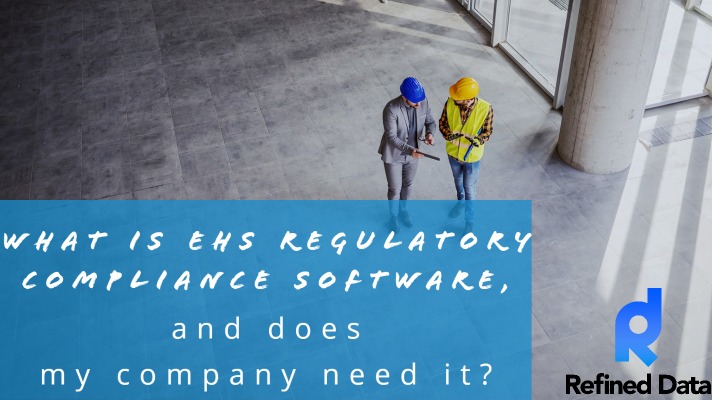 What is EHS regulatory compliance software, and does my company need it?